Two excerpts from The Ascent of Kinder Scout | Peter Riley

Wrapped in luminous cloud, pushed by the wind, we walk up out of Hayfield in the steps of the glorious trespass, April 1932. The cloud is not a metaphor, the art is terrestrial. Eventually our heads will clear it. Stamping the ground, stamping mystery and privilege into the soil, we walk up into our work, hauled on our breath. The foundation of the state is not violence but education. Thought is free on the wind-steps. Rills under grass arches – it can only be a completely open field.

A stone path up the ridge end, ghosts fleeing in the wind, calling, most of them scout leaders and members of Class 2B 1952, most of them long dead, half-remembered and gone. Echoes fading across the fell side. The original calls were reciprocal, to a purpose, keep away from the edge, maintain contact in the mist. They blow away into the silence and dignity of the objects of earth. We can’t see where we’re going and there is no secret knowledge — what, then, do the ghosts want?

We call ourselves to our own purpose, a reason for being here, the pains to be taken. Memory thins, but the calls of 1932 linger longest around us, calls to unite, calls on record, and cannot be forgotten. Cairns set on horizons, the village long vanished but the tumulus stands, sentinel at the gritstone border. That name I was, blown away in cloud as this life must flit with the winged seed driven under the stone, calling in vain for respite. No central European despair can blight this act of trust.

Stone upon stone. How beautiful upon the mountain were the voices, that announced the end of war, feasts in the streets and honey in the cup, the rose opens, all in the arms of the modern state, which makes everything possible, and makes strangers of us all. Kassandra in the language of birds, the language of inscape, saying Don’t despair. A flock of passerines that stays together in the mist by mutual signalling shoots over my head on the brow of the hill. “We shall return,” they say.

Making no claims. No amount of erudition or vision raises anyone a centimetre over the heads of the people. Work your passage, earn your living, bound on the same boat as anyone. Break the lifeline down to the pain and desire that everyone knows. There is nowhere else. There is nowhere else to be or speak. The earth enters you back into its folds unsatisfied, there is no other song; there is only September, because the falling years offer us everything there is.

They taught us to read and we thought we were so grand as to join heaven and earth. But all we did was wallpaper over the crack between myth and science and lose our homes. The farmer’s wife sang a truer song, told a sweeter story, of hope and despair hand in hand walking back into society. Company on the mountain, pulled upwards, out of a pit, a hand on a stone gatepost and a chill wind. “We belong together and we are each other.” In the very teeth of the mist we know what we are. Goodbye, Johnnie. 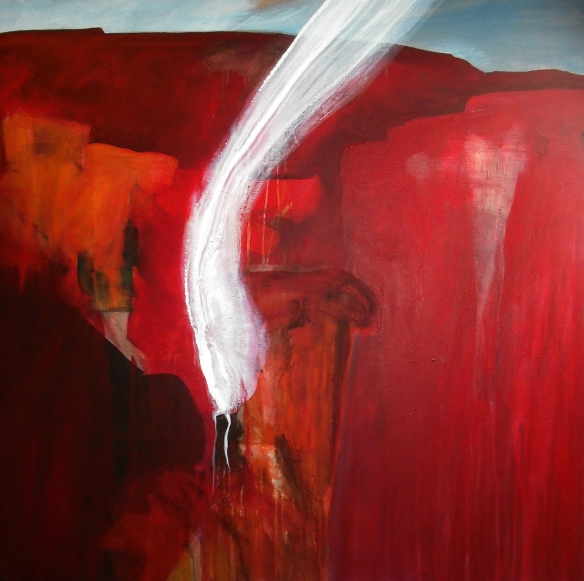 We step up onto the shoulder, the cloud disperses, the land retreats before us, walking backwards into private estates. The butterfly patterns of the fields, fluttering into the distance, all that money sinking into dark undertree pockets, all that erudition frittered away in fancy-talk. Smoothly the hills bend down and curve onto the plain.

Following the edge, facing south-east, fresh blue sky, and that  fearful moan from far away —  “I don’t know where my parents are buried. I have no place to be.” They are buried in Europe, in where it happened, in history. Not in language. My parents are buried in an operatic chorus, a dance to the double-flute, a seaside comedy.

Scattered ashes, and a name in a book. End of a long journey, into the world’s nonsense and brokenness, and back home, to occupy a quiet space among fruit trees and wooden frames protected from snow storms and ideological programmes in provincial ignorance and limited vocabulary. Oblivion in a cemetery of claims.

The wool is locked over our eyes, the classics methodically trivialised in public channels. Look in the public mirror and you’ll see a little toy with big eyes. This is your baby-doll soul, acting out your civic rights. My parents died into this, in the long brick terraces of the Manufacturing Districts. I fled, and hovered trembling in the hills.

And built myself a parenthesis. In it I now reach Kinder Downfall, the pool catching the sun half way down the slope below, the line of water tossed in the wind in an arena of broken strata. And walk on ever barer ground to pause at the summit trig. point, denuded even of peat, a grey desert of gravel and scattered boulders.

From west and from east they came, the Manchester and Stockport men up from Hayfield, the Sheffield men from Edale and met on the summit. And shook hands and ate their packed lunches while gamekeepers’ staffs banged on their shoulders like the jazz-band ball, swatted off like flies. Waved and set off back, knowing something new.

I’ve known these denuded sites for fifty years. We came here to find out what there was, at the end of a climb asking to be walked, at the end of a history under erasure. There was peat and grey outcrops in mist, unidentified birds and a mediaeval boundary stone, there was a pivot of decision about what you want to inhabit.

Wind-carved monoliths, a waterfall blown back on itself in the westerlies. Here we say goodbye to the pit of eternity which destroyed the classical world and by purposed seeing attempt to regain the earth, the high moors bearing a mediaeval boundary stone, the state’s ensign, calling in all our lives as the wind scoops holes in the grit.

Be called in, whatever we can muster of that calm which opens the human condition to inspection, wrap it round the statue, twirl it round a stem. The steady heterophony of a working city swelling between day and night like wing beats, tuned to the double flute. Crouched in a cleft of the uplands, seed and soot shooting past on the wind.

There’s a kind of line, of light, a thought line, which cuts through false histories and comes towards us from the devastated zones. When it gets to the British hills it twirls round a stem, if it can find one. Gravel, boulders, and dark banks of exposed peat. And always the experience wrapped in the line is that of the work force.

Somewhere behind me, towards Manchester, is a patrimony unclaimed. Ahead is a saddleback ridge with a tumulus at its end. Our passionate speech is of the love that defies principalities, and we shall at last find rest where our speech was forged, link by link: famine-stricken families in cellars of the urban labyrinth, nursing the dying child.

So the top of the mountain is where the wild self ceases to exist, dissolves into a yearning for sociality, and a stated purpose dedicated to its safeguarding. Then the stars are cast down to float on the surface of the stream and a hawk swoops over the saddleback ridge. Locked at last into earth we begin the descent.

A network of silver lines falls over experience, like a field system, breaking the grip of totality as the wave breaks on the shore or the air on the mountain side. In and across these polygons we attach principles and mitigate conflict. It is painful walking downhill on stones with exhausted calves, of necessity slowly.

Two excerpts from Peter Riley’s The Ascent of Kinder Scout (the eleventh section of a work provisionally entitled North). ‘Different accounts of the Kinder Trespass of April 1932 exist which are in disagreement concerning its route. Mine, in which the main group walks up from Hayfield to gain the summit of the mountain and there meets a group of Sheffield trespassers who have walked up from Edale, seems not now to be the most respected one.’ – Peter Riley (from his Note to The Ascent of Kinder Scout).

The paintings by Paul Evans are (respectively) titled Landscape and Memory and The Downfall.

The full text of The Ascent of Kinder Scout is now available as a beautifully produced 24-page pamphlet from Longbarrow Press (with reproductions of Paul Evans’s paintings Landscape and Memory and The Downfall on the front and back covers). Click on the relevant PayPal option below to order the pamphlet: